Chiropractic Can Help Improve Quality of Life for Seniors 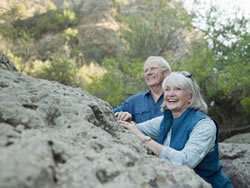 ​The late Baseball Hall of Famer Casey Stengel once said, “The trick is growing up without growing old.” If you’re over the age of 65 (which roughly 13 percent of the United States population is), you’ve likely pondered this same notion at least once in your life as newly released information published by PLOS One reveals that this particular age group has many complaints when it comes to the aging process.

In this study, 7,285 individuals 75 years of age and older indicated that they experienced issues with walking, standing, seeing clearly, cognitive function, pain, weakness, and more. Additionally, the more complaints a person had, the lower their functional outcomes and quality of life.

Since the number of seniors is expected to rise from roughly 13 percent of the population to over 20 percent by the year 2050, that makes these types of issues a major concern for individuals in this age range. Fortunately, chiropractic can help as a number of studies have found that this particular healthcare remedy provides many benefits for people as they age.

For example, one study published in the Journal of Chiropractic Medicine involved 19 people over the age of 40 who struggled with issues related to balance, neck pain, and dizziness–three common complaints of growing older. However, after just eight weeks of chiropractic care, researchers noted “a clinically meaningful change” in the participants’ levels of dizziness, as well as noting improvement in their neck disability, level of pain, and balance.

Chiropractic has also been found to help older individuals with multiple other health concerns. In one specific case which was also published in the Journal of Chiropractic Medicine, an 83-year-old male with “a history of leukemia, multiple compression fractures, osteoporosis, and degenerative joint disease” was studied. Based on his physical condition, he reported his pain being 10 out of 10 on a pain scale and he also indicated that he suffered with spasms and tenderness in his lower back, making it very difficult to care for his disabled wife.

After receiving eight treatments using Activator Methods protocol, the patient stated that his pain dropped to 4 out of 10 (6 pain points in total) and that he no longer experienced pain or spasms in his spine. As a result, he was able to more easily care for his wife.

Regular spinal manipulations offer many benefits such as these for seniors, which ultimately means living a higher quality of life. Perhaps chiropractic is the trick to growing up without growing old?