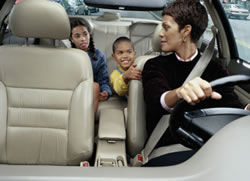 Having one’s head turned at the
moment of a rear impact is a known
risk factor for injury. The combination
of head rotation and rapid extension
reates tremendous strain on the
ligaments and nerves of the neck.

Of the many risk factors that increase the chance of whiplash injury, having one’s head turned at the time of the collision is one that has been recognized since the mid 1990s. In 1994, a group of Swiss researchers1 found that turned head position was the leading predictor of long-term whiplash pain:

“They reported that radicular deficits and associated radiculopathy were most frequently documented in individuals whose heads were rotated at the time of rear impact and that after 1 year the symptoms significantly worsened.” 2

A few recent studies have examined the issue of spinal nerve ganglion injury. This research is based on the theory that during a whiplash motion, the ganglion is crushed or compressed, injuring the nerve bundle. This injury can then, in turn, result in chronic pain. The earlier studies have indeed found that this compression can occur, but no studies have looked at the issue of turned head position. Now a new team of researchers from Yale has done exactly that.

In this study,3 the authors prepared six human cadaver spines and performed test collisions with them in which the specimens were rotated slightly as if looking to one side. The specimens were subjected to impacts ranging from 2g to 8g of acceleration. They then compared their findings to previous findings on forward head position.

The authors state that injury to the spinal nerve ganglion can cause pain in at least two different ways:

From this study and others, it is clear that the spinal nerve roots are at risk of injury during rear end collisions. It is important when dealing with whiplash patients to take a thorough history to determine head position at the time of the crash.