We remain committed to serving our community and caring for our patients during this challenging time. We are continuing to operate during our normal business hours and will update this message if anything changes.

It's difficult to describe the violence of a rear end collision, even one considered to be minor. Using live occupants in rear end crash tests, researchers have found head accelerations can easily reach 9 Gs of force, or nine times the force of gravity. What this means is that the human head—which weighs about 10 pounds, on average—suddenly weighs 90 pounds.

In its most simple form, whiplash is this: the occupant's torso is accelerated in one direction, while the head is going in the opposite direction. In between the head and the torso is the neck, and it's not surprising that most of the injury takes place in the ligaments that hold the vertebrae together.

In fact, the forces on the ligaments of the spine are very high. Ivancic and colleagues1 at Yale University looked specifically at this issue. They found that during a simulated collision, the force in the lower portion of the neck reached 269.5 Newtons, or about 60 pounds of force, in about 1/20 of a second.

The fact is this: the human spine is not built to handle such strains, especially when they are focused on such a small area. 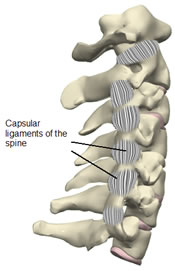 Numerous studies have found that these forces far exceed the normal physiological range of the ligaments that hold the spine together. A new study2 by the same Yale researchers has looked more closely at the effects of whiplash on the spinal ligaments.

The researchers started with 12 cadaver spines: six of them were exposed to simulated whiplash acceleration, and six were used as controls. The individual facet joints were then removed from the spines and tested to see if there was a difference in laxity of the joints between the two groups.

The following graph shows the difference in joint stretch between the two groups. As we can see, the whiplash-exposed ligaments were dramatically weaker than the healthy ligaments.

The authors discuss the implications of weakened ligaments after a collision: